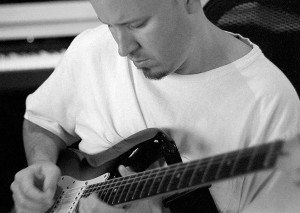 Even at an early age, David Helpling was an inquisitive spirit, a kid with a wild imagination who was always looking under stones for bugs and frogs and things. Now, David roams a musical landscape, exploring different textures and unearthing various moods, and it is that same curiosity that makes his music so stunning and unique.

A self-taught musician, David’s ability to “feel” the music has resulted in two captivating albums that showcase His atmospheric depth as well as his rhythmic sensibility. His debut release, Between Green And Blue, was a finalist for the 1997 INDIE Album-Of-The-Year, and is already considered a favorite among listeners to this genre. On his second release, Sleeping On The Edge Of The World, Helpling takes his unmistakable style and dense sound sculptures to a deeper level.

As a full-time composer, David has written music for several successful feature films. One of which, Trade Offs, had David immersed in the music of India. Featuring several guest artists including vocalist Nidhi Bhatmuley, this score has become a favorite world-wide. “David Helpling’s score for Trade Offs is a lovely and accomplished east-west fusion” – Mychael Danna.

Among other musical influences such as U2 and Bjork, one of David’s main inspirations is film music. The dark and moving scores of Elliot Goldenthal, Edward Shearmur and David Julyan are just a few of his favorites, and it would seem that David has a constantly running soundtrack of his own as well. “Music is always in my head. That’s how I write. I’m always dreaming.”

After several intense years of writing and producing music for film, Treasure marks David’s return to the musical form for which he is most passionate. Working side by side with Jenkins, David’s driven pursuit to create the music of his dreams is on. The combination of these two artists is explosive and limitless…

A Sea Without Memory

Sleeping On The Edge Of The World

Between Green and Blue